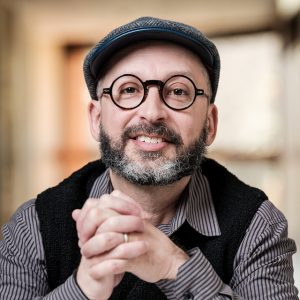 Joel Tauber (he/him; born in 1972; Boston, Massachusetts, USA) comes from a long line of rabbis, including the Gaon Rabbi Yehuda Aszód (1796-1866) of Hungary. Tauber spent 12 years studying Jewish philosophy and religion in Hebrew and ancient Aramaic at the Maimonides School in Boston, where he was valedictorian. Afterwards, Tauber went to Yale University (Connecticut, USA) to prepare to become a doctor but changed course when he took a sculpture class with the critic, art historian, and conceptual artist Ronald Jones; who showed him the potential that art has to generate discourse and facilitate change. These conversations with Ron, as well as with his other artistic mentors — including Mike Kelley, Stephen Prina, Hirsch Perlman, and Patti Podesta at ArtCenter College of Design (California, USA), where he went to graduate school — and his readings of Jewish mystics like Rabbi Yehuda Aszód who talked about the Kabbalistic mandate of Tikkun Olam (doing whatever we can to repair the world); have led Tauber on a series of art, film, and activist projects, including: Border-Ball: A 40-Day Pilgrimage Along The U.S.-Mexico Border, BELT: A 2-Man Memoir, UNDERWATER: An Operatic Disco, The Sharing Project, Pumping, Sick-Amour, Searching for The Impossible: The Flying Project, and Seven Attempts To Make A Ritual.

Border-Ball: A 40-Day Pilgrimage Along The U.S. – Mexico Border
https://borderball.net

Searching For The Impossible: The Flying Project
joeltauber.com/flying