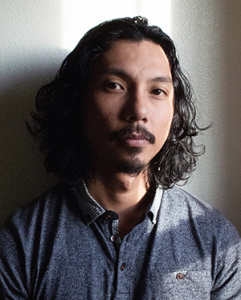 Joe deVera’s paintings and installations are often attempts to clarify the absurd theaters of human tragedy (examining the possible relationships between historiography and art objects), while simultaneously investigating the resonant aftermath of mass conflict. Having emigrated from the Philippines as a youth and further enlisting in the Marines Corps after high school (serving two combat deployments to Iraq in support of the second Gulf War/GWOT), deVera’s works are also autobiographical observations of power structures and the machines of empire.

deVera received his MFA in Painting and Printmaking from the Yale School of Art (2014) and his BFA in Painting from California State University, Fullerton (2011).